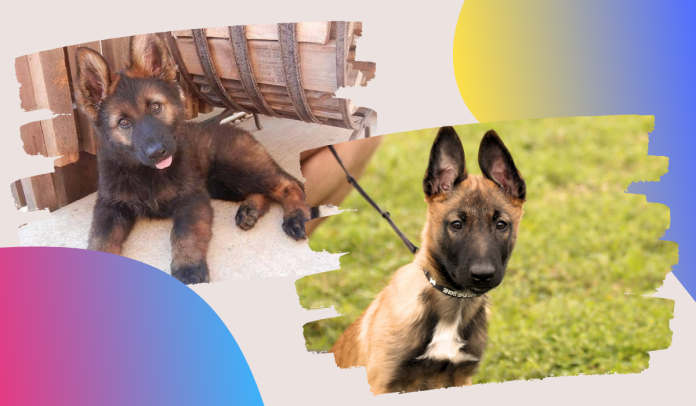 Both Breeds are active, highly trainable dogs that are used for breeding, military and police, work for sheep and other livestock, and work best with experienced dog owners.

So what are the differences?

Because of their similarity, color and fur coat and especially during the puppyhood, they often misunderstand each other. However, they are different in many ways, especially in relation to behavior, lifestyle and physical characteristics.

In this article, we will discuss some important differences between the two species, but first, let’s learn about each one.

Red sable German shepherd will have a similar look to Belgian malinois but this looks a little reddish when observed very closely.

These dog friends were first bred as cattle breeding dogs. Today, the Belgian Malinois can be seen actively serving as guard dogs, police dogs and friendly family companions. Powerful and athletic dog short fur and fan color. Originally bred in the Malines of Belgium, this dog breed has a great vision and excels in a variety of tasks.

Malinois may also look like a German shepherd but eventually when they grow older, GSD will be heavy in size compared with Malinois.

Therefore, these 2 dog breeds exhibit similar appearances at the puppy age but while they grow elder, they will eventually get into their breed characteristics. It is very important that you choose a pet according to your personal preferences and needs.

Why is My Dog Randomly Crying at Night? Germanshepherddog.info

Lesley Everett - March 13, 2021
0
Are Blackberries Safe for German shepherd Dogs? If you want to give your dog a sweet, healthy treat,...

Are German Shepherds Good with other Dogs? Germanshepherddog.info

Can Dogs Eat Eggs? Raw Eggs Vs Cooked Eggs, Which is better?

Lesley Everett - June 13, 2021
0
Can Dogs Eat Eggs? In general, eggs are considered safe for dogs to eat. They are a good source of protein...

Dog Dementia: What are the Signs of Dementia in dogs and How to Take...

Lesley Everett - May 19, 2021
0
Dog dementia:Do dogs have dementia? We are right. Although many veterinarians and dog owners are unaware of it, canine cognitive impairment, or...

Signs and Symptoms of Indigestion in Dogs and how to treat at home?

Lesley Everett - May 10, 2021
0
Indigestion in Dogs is one of the hardest experiences for any pet owner especially when their puppy is clearly distressed or...