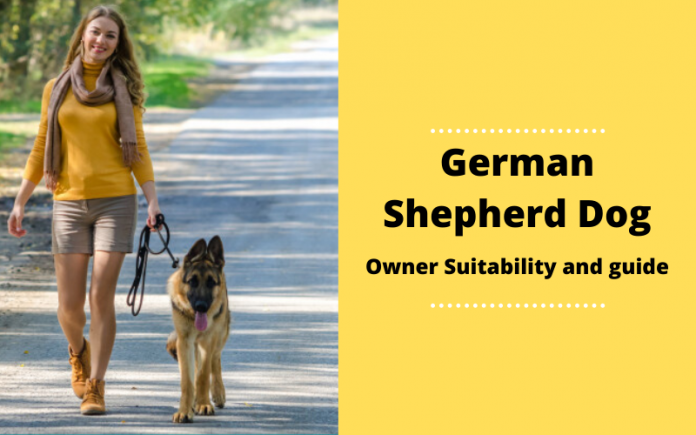 Adopting a German Shepherd Dog is good to go and GSDs are so devoted to their owners, and it is quite natural that he should thrive best with an owner who can show him equal devotion.

The German shepherd basks in his owner’s attention. It is not necessarily true that the only type of person suitable to own a German shepherd is one who is home all day, but the owner who spends the day at work must plan on time with the dog upon his return home.

Exercise is also a consideration for the German Shepherd Dog. Remember, these dogs were bred to work and to be active. The breeders’ original focus was on function. Since the pet dog is not being used for his intended purpose, he must be active in other ways.

A German Shepherd Dog who lives at home with his owner cannot exercise himself; it is something that both dog and owner need to participate in.

It is not fair to the dog, who had patiently waited all day for his owner to return from work, for the owner to come home and promptly park himself on the couch for the remainder of the evening.

Exercise is essential for the German Shepherd’s well-being, both physically and mentally.

It provides this athletic breed with much-needed activity, plus it helps him feel like he has a purpose.

A house with a securely fenced-in yard is ideal for a German Shepherd owner, as the dog will have some freedom to run and play by himself.

The dog should still be under the owner’s supervision when Off-leash, but at least the dog will not be totally dependent on his owner for exercise.

This does not make up for time spent with his owner, but will at least give the dog some physical benefits.

An owner who keeps a German Shepherd in a house without a yard or in an apartment must make the commitment to regular runs/walks/ playtime with the dog.

Owning a German shepherd for the first time

Adopting a German Shepherds is really good and are excellent dogs for interested first time owners. They are very intelligent, loyal and loving dogs, they are easy for single owners or families to train and be a great companion, but require consistent time and patience in training the dog in a right way.

The German Shepherd will fit into just about any family structure… adults, children, single people, etc. It is just necessary that the breed’s characteristics are taken into consideration.

While adopting a german shepherd, adopters should expect their new dog to have some time to adjust to their new family, including residential pets, a new schedule, a new home environment and a new communication style.

Major life changes can put considerable stress on whether dogs are rescue dogs or not. This is also the case when the dog’s routine changes significantly, such as a change in the home, the addition of a new family member or pet, and a change in family dynamics. During this adjustment period, the new dog will exhibit behavior.

Odd Behaviors in the adjustment period may include serious attempts to escape, including housing accidents, door knocking, jumping fences, digging under fences, trying to avoid interactions with its new owners, and barking loudly at others. They may be loss of appetite or abdominal pain or something similar.

So, it would take 2 to 3 months for a new dog to get adjusted in the new environment.

Although your German Shepherd Dog may never be required to do more than provide companionship and protection to you and your family, you should be proud to consider the many functions that the breed can be called upon to perform.

German Shepherd Dogs have been used as military dogs since World War l. Their roles have been numerous. The dogs served as sentries, guards, mine detectors, rescuers of wounded soldiers and carriers of food and medicine.

The instinct to serve, which is born in the animal, is the foundation Of his functional versatility along with his physical and mental traits of strength, size, endurance, and intelligence.

It would be fair to say that the majority of all service dogs in the world are German Shepherd Dogs. The potential for specific service duties lies within each German Shepherd Dog, but professional training is required to actualize it in almost every case.

As previously noted, the German Shepherd Dog is an excellent herding dog. This was his original function and remains a central factor in his modern versatility.

The dog’s endurance, his rough-coated imperviousness to weather, his sure-footed speed, responsiveness and his deep-rooted instinct to protect anything small or weak make him an ideal herding choice.

It is only in Germany, however, that the German Shepherd Dog is the first choice among farmers and stock owners.

In the United States and Great Britain, Other native breeds, more traditional and therefore more attractive to some, like the Australian Shepherd and the Border Collie, are predominantly seen in herding capacities.

German Shepherd Dogs were especially impressive as scout dogs, often able to detect the presence Of an enemy at 100 yards away.

Countless human lives were saved by these dogs but many of the animals were sacrificed in services like mine detection.

From these military uses developed the breed’s important role as police dogs. In the pursuit and apprehension of criminals, the breed has proven itself valuable and rather more effective, certainly more humane, than guns.

The dog’s cool nerves and intelligence make him an excellent choice for crowd control. His scenting ability makes him invaluable in search-and-rescue work, as well as bomb and drug detection.

The skills and abilities of these functions are combined in Schutzhund, a training and competition program that emphasizes the elements of protection. Schutzhund means “protection dog” in German.

Schutzhund trials have existed since the early 1900s. They include tests for temperament, tracking, and protection.

Dogs are scored according to their performance in these areas and must exhibit complete obedience (despite distraction), confidence, courage, scenting ability, determination, and concentration in tracking

The preceding roles have stressed obedience founded upon the breed’s natural proclivities.

The German Shepherd Dog is not a particularly aggressive dog. He is, however, very protective of his family and property.

This is the basis of the alertness and protective instinct that has made him a staple in institutional use and an effective watchdog for the home and family.

The noblest and pride provoking use of the German Shepherd Dog has been in the service Of people with physical challenges.

The German Shepherd Dog was the first dog used as a guide dog for blind individuals and later for deaf individuals. The dog’s initial employment as guides for blind World War I veterans led to the creation Of the Seeing Eye Foundation in 1929.

Today this breed’s traits of composure, intelligence and responsibility, combined with all of his other excellent aspects, continue to make him the first choice in this role and all of the other roles designed to serve humankind.

The German Shepherd Dog has been used in more areas of service to humankind than any other breed. Here are ten important areas that the breed has served:

The German Shepherd Dog’s working ability and trainability have earned him the distinction of being the most recognizable service dog in the world.

Can Bernedoodle get along with German Shepherd? All You need to know

admin - November 22, 2020
0
We call it the German shepherd Puppy feeding Chart because, though your dog appears to be fully grown from the age...

admin - October 15, 2020
0
While your puppy mom and breeder are starting her on good housing habits, you need to do some shopping for In-home dog...

admin - December 1, 2020
0
German Shepherd Allergies are quite common, this may come as a surprise to many people, even dogs are prone to allergic...

How much Exercise does a German Shepherd Need?

admin - November 10, 2020
0
Before we discuss the German shepherd exercise needs let us look at some brief about the dog. The German Shepherd dog...

admin - December 18, 2019
2
German Shepherds are undoubtedly the best and most loyal dogs in the world. One of the strong and recognizable features of these...

admin - April 16, 2021
0
Belgian Malinois German Shepherd Mix is the most confusing combination as this kind of mix carries the features of both the...

admin - April 2, 2021
0
Neurological Disorders in Dogs: Dogs have the same nervous systems as humans and experience trauma and degeneration of the brain, spinal...