Dog Ears Held Back? There are many reasons why dogs put their ears back, but some of the most common reasons include hiding from danger, expressing dominance over other dogs, letting other animals know they’re in charge, and communication.

Observing a dog’s ears is, as a rule, the best way to gauge the level of attention that the animal is giving: Dog ears that are laid tightly back against the head suggests a fearful or timid reaction. Dog ears that are erect and facing forward indicate that they are engaged.

Also Read: What Dogs See When They Watch Television

What do dogs say through their Ears?

When a dog’s ears are tucked in close to the head, it usually indicates that the dog is experiencing negative feelings. The following are some of the most popular explanations for why dogs flatten their ears.

One explanation could be sadness, which causes people to pull their ears in toward the sides of their head and sometimes even down to their sides. When a dog’s favorite person leaves, they may exhibit this behavior. When the dog observed some of his canine companions playing, but he couldn’t join them because he was on a leash, he would draw his ears back like this. I’ve seen it happen.

When dog ears held back, it can often be interpreted as a sign of dread. This is especially the case when additional facial and body signs linked with this emotion are also present. You may tell how afraid a dog is by looking for signs of fear such as a lowered body posture, a lowered tail, ears that are back, panting, yawning, lip-licking, avoiding eye contact, and attempts to hide, run away, or retreat. It is essential to keep in mind that all dogs react to fear in their own unique way, and that some of these indications may not be seen at all. Some dogs will also exhibit other signs of anxiety such as a stiffened tail or body, shaking, wrinkled brow, whale eye, squinting, dilated pupils, or pushing the corners of the lips back.

When dogs are anxious, dog ears held back, a behavior that is frequently accompanied by other signals of concern in the dog’s body language, such as flicking of the tongue, rapid breathing, muscle tension, or other symptoms of nervousness. This is a common pattern of behavior exhibited by dogs that are compelled to ride in a car despite their aversion to automobile rides or by dogs that are overstimulated by an excessive number of children all at once. It is possible that you will observe this behavior from your dog when you are touching them, which is an indication that they are not having fun.

When the ears of a dog are in their natural, relaxed position, it almost always means that the dog is at ease with whatever is going on around them. However, it is usual to observe one dog keep its normal ear posture when greeting another dog, indicating that they are at ease, while the other dog puts their ears back, indicating that they are not at ease. This occurs when the dogs are greeting each other. It’s possible that putting the ears back on represents an appeasing behavior in this scenario.

When a dog is going to bite, it may often pin its ears back against its head in preparation for the attack. It has been hypothesized that this may serve to safeguard their hearing by keeping their ears out of the way of any fangs that may be present in the area. As a warning sign, this would be paired with other body language, including as growling, barking, lunging, displaying teeth, going stiff, flicking tongue, charging, harsh glances, and facial expressions suggesting uneasiness or fearfulness.

When a male is courting a female, one of the numerous ways he expresses his interest in her is by pulling their ears back and exposing more of their scalp. This body language is only one of many ways that he shows interest.

At the end of the day, the motion of drawing one’s ears back is pretty plain; nevertheless, the message behind this action is not always so clear. Unfortunately, humans have a very tough time reading the facial expressions and body language of dogs. It is essential to acquire knowledge about dog body language in order to accurately judge the disposition of your dog and reduce the number of difficulties that may arise when interacting with them.

Dogs put their ears back to help them determine the direction of sound. By doing this, they can better pinpoint where the sound is coming from. This technique is used when a dog is trying to locate someone or something.

Dogs put their ears back to listen more attentively, and their acute senses of hearing help them pinpoint sounds in the environment. Dogs are constantly on the lookout for potential threats, so they can warn their owners or fellow pack members if they sense danger. This heightened sensitivity also makes them excellent candidates for service dog work, as they are able to detect various types of disabilities. 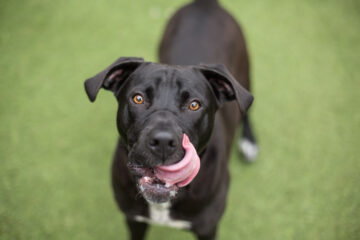