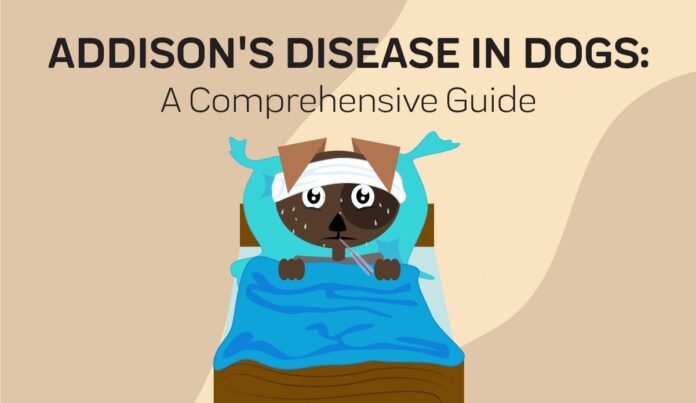 Addison’s disease in dogs (hypoadrenocorticism) is a hormonal disorder in which Thomas Addison, a British scientist, became the first person to prove that the adrenal glands are essential for life.

A diagram shows where the dog’s adrenal glands are located. Dogs, cats, humans and other species have a pair of small glands in the abdomen, one next to each kidney.

Also Read: What are the Symptoms of High Blood Pressure in Dogs?

They are so named because they were recognized by anatomists long before their important (life-saving) function was understood.

The glands produce two substances, glucocorticoids and mineral corticoids, which are vital to life.

Once they are synthesized, these substances are secreted into the bloodstream and circulate throughout the body. As such, they are classified as hormones.

Addison’s disease occurs when there is too little glucocorticoid or too little mineral corticoid in the body or both.

Glucocorticoids are natural cortisone, which is essential for life and is important in making people feel better. Glucocorticoids have many functions that affect appetite and immune system function.

Physicians generally use natural and synthetic cortisone because they can be used as a medical treatment for minor problems (e.g., poison oak) and serious malignant medical disorders (e.g., some cancers).

If the patient has too much or too little cortisone in their system, serious medical problems will ensue. Cortisone is one of the two components of Addison’s disease.

Mineral corticosteroids are another important substance produced by the normal adrenal glands.

These regulate two important “salt” concentrations in the body, the levels of both sodium and potassium.

Addison’s disease is usually the result of some destructive process affecting both the adrenal glands and the cells that produce these two complex hormones.

The most common cause of Addison’s disease is the destruction of two adrenal glands by a person’s own immune system.

The dog’s immune system will constantly on the lookout for foreign objects. The best examples of invaded objects that the immune system wants to kill are bacteria and viruses.

For reasons not well understood, the immune system occasionally sees normal body parts as “foreign” and sets out to kill these problems. In this abnormal case, the immune system sees the adrenal glands foreign and kills these cells.

Cancers or infections that can attack and kill the adrenal glands are less common causes of Addison’s disease.

What are the symptoms of Addison’s disease?

Addison’s disease is very common in dogs and rarely in cats. When seen, it is more common in young to middle-aged female dogs.

However, this condition has been diagnosed in dogs and cats of all ages, both gender and intact and in neutral animals. Some dog breeds may have pre-existing disease.

Usually, the symptoms of Addison’s disease come on quickly, usually within a few days; However, it can develop over weeks or even months.

Most owners note that their pet develops many problems at the same time. These issues include:

A common observation is weakness or loss of appetite. Some dogs have been observed shivering, shivering, or trembling as they feel cold.

Others seem to have suddenly collapsed and quickly developed a shock-like condition.

What tests are required?

Vomiting, diarrhea, loss of appetite and weight loss are very specific problems. These are symptoms of a dog or cat that has stomach, intestine, heart, liver or kidney disease.

To further complicate this problem, diseases of other organ systems are much more common than Addison’s disease.

So your veterinarian may or may not suspect Addison’s disease after talking to you and completing a physical exam.

Your veterinarian believes your pet is sick and recommends a test battery that simultaneously assesses various organ systems.

What is the recommended treatment for Addison’s disease?

Addison’s long-term treatment is not as difficult to diagnose in the first place.

Furthermore, long-term treatment such as intensive care, which is initially needed if the patient is in a serious, life-threatening condition, is almost impossible.

There are both glucocorticoid and mineral corticoid replacement drugs.

How Do You Take Care of Your Dogs During Winter Season

Nanditha G - December 23, 2020
0
Dogs During Winter: Because most dog owners have fur for their pets, they live with the myth that they can tolerate...

How to Take Care of Newborn German Shepherd Puppies and Mother

German Shepherd Poodle Mix: how big do sheepadoodles get?

Lesley Everett - January 29, 2021
0
Sheepadoodles are U.S. Originated. This breed is developed by the U.S. military as a military police dog in the 1960s.

Corona Vaccine for Dogs – Is my German Shepherd at Risk?

Lesley Everett - April 15, 2020
0
Corona Vaccine for Dogs: The dog's respiratory coronavirus (CRCoV) is part of the kennel cough complex and can spread in kennel-like...

Lesley Everett - April 3, 2020
0
Canine coronavirus is the most contagious intestinal disease. Coronavirus is a mild infection and is rarely fatal, but keep it with...